The Bingham Canyon Cooper Mine is a very noticeable land mark that is visible almost anywhere in the Salt Lake Valley but there was also another open pit copper mine in Ruth, Nevada.  Ruth, Nevada is 6-8 miles from Ely, Nevada, along highway 50 going east.

The mining started in 1869 when silver was discovered lying on the ground which started a silver rush in the areas around Ruth and Ely Nevada.

Like Ruth the Bingham Copper Mine had begun as a gold and silver mining operation and later copper took the forefront of the mining. Ruth likewise soon found that there was not a lot of silver in the ground but there was copper to be mined.

In 1956 Kennecott Cooper bought the Ruth mine from Nevada Consolidated Copper and started open pit mining in 1958.  Almost immediately the town of Ruth was moved because the mining opened up a pit and it grew rapidly.  Kennecott built a new town and turned it over to White Pine County for administration.

I remember going to Ely in the early part of 1963 and working as vacation relief.  I worked at Safeway Food Stores and for a while I worked as vacation relief for the Meat managers in the Salt Lake division.  I spent two weeks in Ely which was close to Ruth and it was a very busy store.  Things were going good at that point in time for the Ruth mine.

Kennecott Copper soon turned the Ruth Mine into the largest open pit operation in Nevada.  Copper mining at Ruth remained strong until the downturn in the market hit in 1999.

The Lost Dutchman's Mine

Earlier in this month of July the news media was covering a story of 3 Utah men who had gone into the Superstition Mountains in Arizona.

They didn't have camping gear with them or food and very little water.  They said they would be back by July 10th.  It is now July 29th and the only part of the expedition that has been found is the vehicle they drove into the Superstition Mountain State Park.  The search for them has been called off by the Maricopa County Sheriff's Office.

Old tales of lost gold or treasures have cost many a treasure hunter their lives.  Granted some succeed and find riches and fame but they have generally spent years of researching both records and the country where the treasure is supposed to be.

To the novice going into that sort of country that makes up the Superstitions in July is a risky deal even if prepared and experienced.  It is sad to say but it sounds as if these gentlemen were neither prepared nor experienced.

There is a lost gold mine here in Utah also that has stirred up a great deal of interest over the years.  Out in the Uinta Mountains

around the Tabiona area there was a gold mine and a man named Rhoads who was allowed by the Indians, Chief Wakara, to go into that mine and retrieve gold for Brigham Young when it was needed  in the early years of settlement by the pioneers.

When Rhoads would go into the mine he would be escorted by Ute warriors and he was restricted as to how much of the gold he could bring out at a time.  The stories say that he could only bring out what one horse could carry at a time and that it was not all newly mined gold but some refined gold also.  (Spanish Gold)

There are hundreds of stories about the Rhoades mine

there are many who have searched and never returned from that quest nor been heard from again.

One of the mountains in that area has even gotten the distinction of being a killer mountain because those who have gone up into it have never returned.  Some say the Indians still guard the mine and the gold.

Things to think about!
Posted by Harland W Larson at 4:41 PM No comments:

A couple of months ago I went with my son and his wife and couple of their frends to a place called the Cotton Bottom for a Garlic Burger.  They serve good garlic burgers, and as we were eating and talking I became rather nostalgic and some of my memories of the area and the Cotton Bottom came to the surface as we shot the bull.

The area where the Cotton Bottom is located is called Knudsens Corner which is at 6200 South and 30th East in Holladay, Utah.  In days gone by I used to spend time there because there was a cafe right across the street from the Cotton Bottom that was called Smiths.  We used to go there in the mornings for coffee a lot of the time and breakfast quite often too.  Smiths was a local coffee stop for most of the men in the area at that time.

What struck me was a memory, a flashback from those days and a blind miner that used to come to Smiths now and then.  He was a miner and he had an active mine in Big Cottonwood Canyon that he worked even though he was blind.

I brought up the memory to the friends that I was with wondering if the memory was real or just something vague that I had hung onto.  Dan, one of the others I was with also knew of the blind miner that used to be in the area.  It was unusual for anyone to be mining in the Wasatch Front Mountains in the 1950s and 1960s because the BLM had closed down all mining in these mountains with the exception of the old Silver King Mine in Park City, but it was closing down in that time period.

Curiosity peaked I did a little research and found more on the blind miner.  He was real and not my imagination.  His name was James Leroy Newman, or Roy as he was called.  He was a son of pioneer stock and was born in Holladay in 1893.  My grandfather's farm was in this area also on Highland Drive and about 60th South and in that same time period.  Roy and his brother had a mine up Big Cottonwood Canyon somewhere close to the old Maxfield Mine.

One day in 1929, Roy and his brother were mucking out ore from blasts they had set off the day before when they discovered a charge that had misfired and not gone off and Roy decided he better take care of the miss before leaving for the day.  Somehow in the process of trying to reset the charge it went off and blew up in his face.

With the help of his brother he was able to get out of the mine and down the canyon but he had cut an artery in his hand and his face was bloody.  Worst of all though he had lost his sight.

Roy was laid up for a year or so before he decided that he was going back to work on his claims and so back he went.  At first he hired a man to help him in the process but he quickly learned to solve the daily problems of being blind.  He once made the comment that it was hard to cook for yourself when you can't even read the labels on the cans.  But he solved those problems and also the problems of being a miner who was blind.

He was able to do this because his left eye had a small window at the bottom of the eye through which he could detect light.

He also learned to tell the difference between regular rock and ore by the weight, hardness and the ease with which the drill would sink.  He would do the drilling, blasting, mucking, timbering, whatever there was that needed doing.  He kept up the active mining for over 40 years from the time of his accident.

James Leroy Newman died in April of 1974 and he kept mining through the whole time except for the last year during which terminal cancer forced him to quit active mining.  It is a fascinating story about a rather miraculous individual.  I am not sure where he lived but was told back in those days that he walked to the cafe when he came there.

A RATHER UNIQUE MAN!

Posted by Harland W Larson at 10:09 AM No comments:

Bingham Copper Mine is One Big Hole In The Ground

A number of years ago, back in my high school days I can remember more than once going out to the town of Bingham, To Bingham High School to play basketball and also football.


At that time Bingham High School was a small school located in the Southwest part of the Salt Lake Valley. The town of Bingham was in the Bingham Canyon which was a narrow canyon in the Oqirrh Mountains. 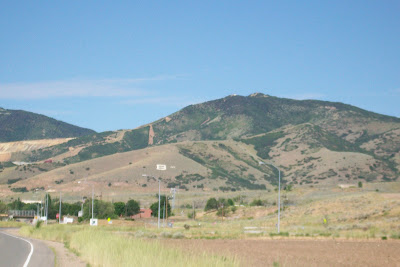 The canyon received its name from the areas first settlers, two brothers, Thomas and Sanford Bingham. The brothers arrived in the canyon in 1848 and used the area to graze their horses and cattle.
In their travels chasing their livestock they happened upon a discovery of gold.
Being of the LDS faith and being upstanding members of that community they took their discovery to Brigham Young who was the head of the church.
Brigham Young did not want to have a gold rush started in this area because he did not want the influence that a gold rush would bring and so Brigham told the Bingham brothers to just let it be. And they did!
It was a number of years before anyone did anything. And nothing more was heard of the gold in Bingham Canyon until in 1863 soldiers from the US Army found the gold and staked mining claims in the area and start mining the gold.
With the mining started, by 1873 over $2 million worth of gold had been dug out the canyon. Siver was also being mined but by 1900 copper became the focus and gold and silver took a back seat to the copper.
Then Kennecott Copper came in and took over and by 1920 there were 15,000 people living in the Bingham area and another town, Highland Boy, had sprung up to the north of Bingham Canyon.
It is said that the area sported 30 saloons.
But by 1972 the town of Bingham was gone!
Not because the mine failed or ran out but because the mine flourished. And it really flourished. The town of Bingham was consumed by that ever expanding hole in the ground. 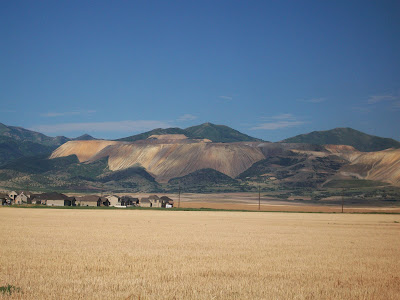 In November of 1971 the town's remaining 31 residents voted 11-2 to disincorporate the town of Bingham. In 1972 the last of the buildings were razed.
The town of Lark succumbed to the mine's advance and the town of Highland Boy went by the wayside also. 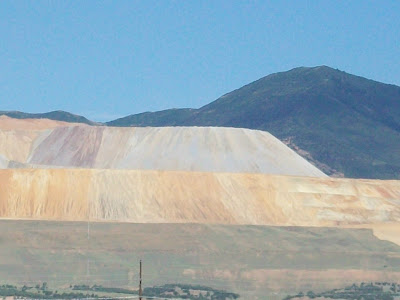 The township of Copperton was established in 1926 and is still there in the mouth of Bingham Canyon. The Bingham City Cemetary is still in place but not too well cared for anymore. 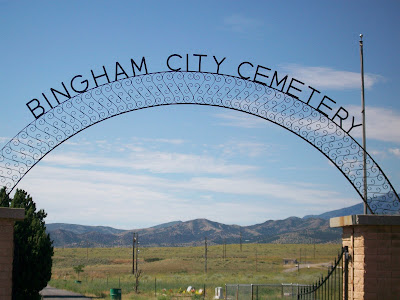 But the mine is still growing and going strong!
That hole in the ground is the largest excavation in the world and it can be seen from outer space. 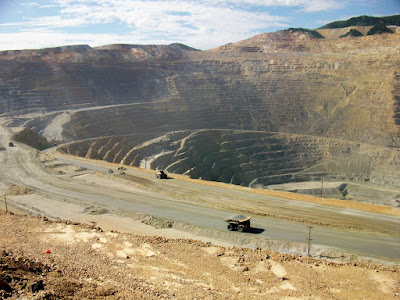 It is nearly a mile deep and 3 miles across and continues to grow. 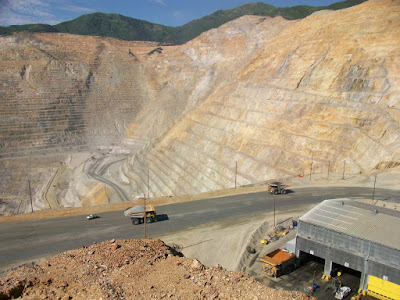 The amount of material that has been moved boggles the mind. Just looking at the tailings piles is an absolutely astounding experience especially when you get up close to them like driving up over them to get to the visitors center. 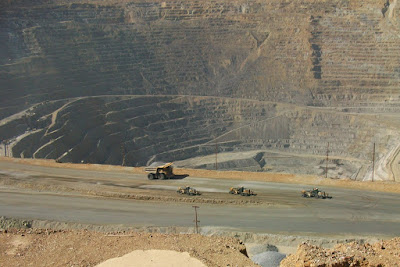 Mountains have literally been moved. 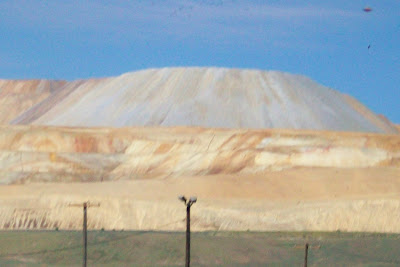 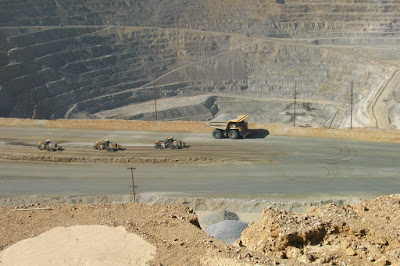 And the men and machinery and technoloy used to accomplish this feat are a sight to behold and a wonder to watch. 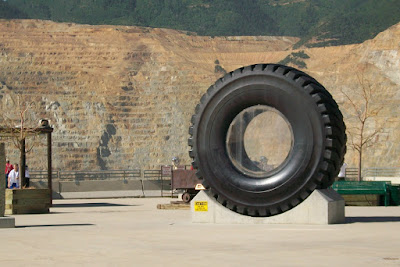